Trinity Podiatry in Edinburgh offer tailored treatments to tackle foot disorders. Get in touch for more information on orthopaedic devices.

They may be simple, commercially made devices, such as cushioned heel cups or insoles for shoes sold over-the-counter in drug stores or other retail establishments.

The best orthotics, however, are those custom-tailored by a Podiatrist and specifically crafted to meet the needs of a particular individual. This is done by making an impression of the foot called a cast. The impressions in the cast duplicate any misalignment in the foot.

Specialists in an orthotic laboratory can then correct the misalignment with compensation and stabilisation techniques. The finished orthotic is then placed in the patient’s shoe and helps keep the foot in proper alignment.

Depending upon the patient’s needs, the orthotic may have padding to cushion the foot against the weight of the body.

Functional orthotics incorporate special wedges to adjust the heel or forefoot, correcting defects in the arch that cause poor shock absorption, such as excessive pronation (flattening of the arch) or supination (an arch that is too high making a foot a poor shock absorber.

Other accommodative orthotics are designed to treat pain and pressure on the sesamoid bones, collapsed tarsal bones, sores and chronically inflamed toes.

If there is a family tendency to foot, knee, leg or back problems, then prescribing children custom orthotics from an early age, can help prevent problems like flat feet and bunions from developing.

Children who suffer from “growing pains”, which are really muscle overuse pains, or sporting pain really benefit from custom orthotics.

Children grow out of their orthotics annually and the lab we use offer an outgrowth insurance which covers a single claim for growth and/or loss, although very few children lose their orthotics as they look after them because they find them so helpful.

Orthotics can be prescribed to any child from around the age of 2 upwards.

Because perfect feet are very rare, almost everyone can benefit from orthotics. They can prevent and alleviate many of the common foot, leg & back complications that cause discomfort in otherwise healthy people. An analogy can be made between orthotics and eyeglasses. Both adjust bodily imperfections that inhibit people from functioning at their maximum physical potential. In both cases, a physician will do a complete examination and prescribe the proper amount of correction.

Almost anyone can achieve some benefit from an orthotic. There are several common symptoms that may indicate misalignment of the feet.

You may be a candidate for orthotics if:

Your feet should not hurt. Pain is the body’s way of warning you something is wrong. If you ignore your pain, the condition causing it could become worse. Relief is closer than you think.

To explain how orthotics function, it is important to understand the mechanics of walking.

The mechanics of walking

Each step, the heel ideally should land almost perpendicular to the ground, with a slight inclination of only a few degrees toward the outside of the heel.

The heel then should start to lift off the ground, shifting the weight up to the big toe and forefoot, and the foot supinates.

This coordinated motion occurs in much less time that it takes to describe. It is, nevertheless, a complex process in which many things can go wrong. If a structural problem is present, the foot can collapse under the body’s weight.

Runners and athletes, in particular, exert much greater forces on their feet than those generated by simple walking. This can lead to more severe injuries, such as sprained ankles, shin splints, knee pain and even fractures.

Over time, stresses on the feet can deform them. One of the foot’s main functions is to absorb shock as the body’s weight shifts with each step. It does this through a complex process in which the arch of the foot flattens slightly, this absorbs and distributes the weight throughout the entire foot.

There are two major problems that can occur in this mechanism:

Instead of spreading it throughout the entire foot, the weight of the body falls only on the heel and the bases of the toes. This increases stress on the foot, especially the heel.

Furthermore, because the weight is not absorbed well in the foot, it radiates up the leg to other joints. Over time, this can cause pain in the knees, hips and lower back.

How orthotics can help

To correct this condition, an orthotic is used to bring the ground into even contact with the rest of the foot. This allows the entire foot to support the weight of the body. Extra cushioning can be built into the orthotic so that some of the force does not even reach the foot.

A different problem results if the arch flattens too much. This is known as a pes planus or flat foot. In such cases, the weight distribution on the foot is too far on the medial or big toe side. A flat foot is unstable and cannot maintain a proper arch.

Over time, the weight of the body on an unstable foot will cause the bones of the foot to become misaligned. This can lead to the development of bunions, hammertoes and other foot deformities, as well as arch, heel, ankle, leg, knee and lower back pain.

To address this problem, an orthotic with an increased arch will be prescribed to distribute the weight laterally. Depending on shape of the foot, the heel of the orthotic can be slanted to shift the weight more toward the centre of the heel.

While orthotics can be made by several different processes, the gold standard is still to make a non-weight-bearing plaster cast of the patient’s foot. This is called a negative impression.

The cast is sent to a laboratory with a prescription for recommended modifications. At the lab, the cast is scanned with a laser scanner to produce a 3D image of the patient’s foot. This scan is kept for future additional orthotic production.

Using the physician’s recommendations for corrections, the lab technician’s custom-mill an orthotic that incorporates the necessary adjustments. This will provide the patient with the support, stability, cushioning and alignment necessary to keep his or her ankles and lower body comfortable, healthy and pain-free.

Laser scanning the patient’s feet will eventually take over from plaster cast moulding once this process is perfected. In the future it will speed up orthotic manufacturing processing. 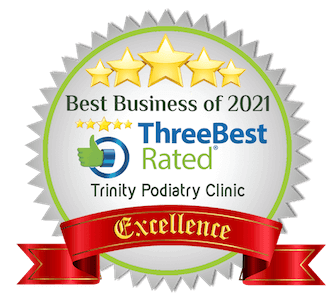